POSTPONED - Keyboardist John Sanchez-Lloyd has, over the years, played in numerous bands including Tui Award winners The Coalrangers. He has backed a variety of performers including rockabilly artist Rosie Flores, blues singer Ruby Wilson as well as support for John Hammond, Blind Boy Paxton and Darren Watson. His session work has seen him contribute to recordings by many NZ artists including The Eastern, Graham Wardrop, Tiny Lies and The Gypsy Pickers.

Guitarist Phil Doublet is a multi-award-winning musician and is no stranger to the music scene. As a multi-instrumentalist and working from his home base in Christchurch, he is sought after as a session player for recording projects in Europe, U.S.A, Australia and New Zealand and is a staunch advocate for original music and has produced five albums which several have received accolades, including finalist for NZ Best Country Album of the Year. 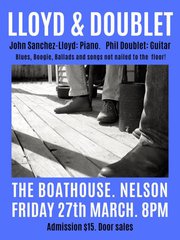 Motueka Library: Read Around the World

Murchison Library: Read Around the World