Ian Trafford and William Moloney have both written fascinating novels based on their grandfathers’ WWI diaries.

During his childhood on a farm near Te Karaka, west of Gisborne, Ian Trafford’s father came home one day with his grandfather Alick’s secret First World War diaries. Ian soon knew that some day the real, raw story of our Kiwi boys in this un-great war, and afterwards, needed to be told. In August, that story made its way into the world as the novel, Into the Unknown. Readers will see the war unfold through Alick’s eyes and learn about his and his companions’ attitudes to the army, to female company, to the enemy soldiers, to the hospitality provided by people under pressure, to the war itself. And after the drama and tragedy of war, comes the return home and the efforts required to make a living while remaining steadfastly silent about the traumas of those terrible years – an unseen fight that continued and affected generations to come.

Ian will be joined on stage by fellow Nelson-based author, William Molloney, whose 2015 novel, The Battle of Messines Road, was also based on his grandfather’s WWI diary. 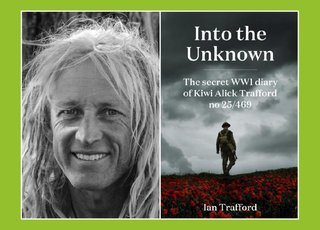