Paranormal Activity film screening and Q+A with the director

Horror film Paranormal Activity (R16), directed by Oren Peli, tracks the story of a young couple who move into what seems like a typical suburban house until they become increasingly disturbed by a presence they experience in the middle of the night.

In the style of The Blair Witch Project, all of the low budget handi-cam footage is presented as if it had been discovered after the fact, shot by the couple as they experience these strange happenings. Shot on a miniscule budget of $15,000, Paranormal Activity went on to gross $193 million worldwide, and inspired equally successful sequels. To date the four films in the series, made for just over $13 million altogether, have earned $714 million. 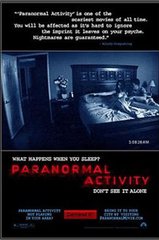 Yoga On The Beach 8am Saturday and Sunday