From across the grown ocean returns YOLK! Wellington's premier
gutter-folk artist.
Drawing inspiration from 70’s folk-rock and 90’s grunge, YOLK performs
a cathartic lounge act ripe with sincere cynicism and tears for your
beer lines to live by. As acoustic guitars pluck sombre and sweet, a
heavy vocal tells it straight like your favourite heartfelt broken
record.
Following the yeah… that was 2020, YOLK lived through the release of
their first physical album “Cherry Blossoms & the Moon” and
subsequent living theatre that was the string of shows behind the
“Moon” and the “Summertime” music video.
With airplay and live performances on Wellingtons RadioActiveFM, YOLK
has been reaching for those dying stars with all the gusto of a dry
drunk at happy hour.
As 2021 rolls up, YOLK’s “Sleeping Country”, an album recorded
entirely on a series of upcycled speakers turned microphones, is
imminent! Written as an ode to the Waimea plains and crippling
inner-city pain, “Sleeping Country” is music for the weird and weary.
The first single “All I Love Is Wrong” has been set free with the full
album following in March 2021. 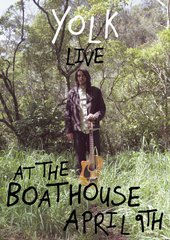 Operation Grapple - We Were There: A Photographic Portrait Exhibition of NZ Nuclear Test Veterans