Following on from the 7 years of constant touring that fuelled the EP ‘Traveller”, Monty’s first 2 years as a father have defied him to delve deeply into what slowing down might uncover.
The single “Catalina” gives us an intimate insight into this world, via the imaginary lens of whoever owned that abandoned trailer sailer down the road… There had to be a song in it!

Embracing change, reinventing life, and connecting to the source are themes that drive Monty’s full-length debut album, out this spring.

Monty Bevins is a New Zealand based singer-songwriter, known as a touching, spirited performer, whose soul-folk songs ask the big questions while telling the small stories. With a warm rich voice and articulate guitar grooves, Monty digs out and distills themes of tenderness, personal revolution and adventure 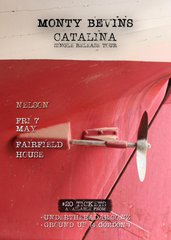 The Sweet Caroline Tour: A Tribute to Neil Diamond