Recently returned to Aotearoa after two decades travelling the globe, Duncan Haynes is one of New Zealand’s finest jazz pianists. Having lived, performed and recorded in the UK, Europe, the USA and South America, he brings a wealth of experience and an international vision to his music.

With a classical background in piano and cello, Duncan studied jazz with the very best of his native New Zealand at Massey University, Wellington.The following years found his arrangements on the multi-platinum selling pop albums of Bic Runga and at huge outdoor events such as Symphony Under the Stars in Auckland and the official millenium celebrations in Wellington. He then spent 8 years based in London, performing all over the U.K. and Europe
After a stint playing rock and blues in Lousiana, USA he moved to Lima, Peru where the music of South America captured his imagination.
Duncan has recorded regularly throughout his career with 5 studio albums to his credit.

Duncan teams up with Mark Lockett (drums) & Seth Boy (bass) to present a concert of original compositions, drawn from his 5 studio albums, highlighting the power, flexibility and sheer beauty that a piano trio can achieve.

Tickets from reserve seats, pay at the door. 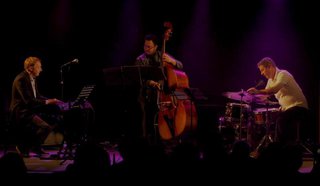