The Free House, launched in 2009 in a small converted wooden church in Nelson, was one of the first pubs in New Zealand to be created from the philosophical standpoint of increasing, rather than restricting, the choices available to beer drinkers.

A free house is a pub untied to a single brewery. Most pubs today are still “tied houses” where brews from one brewery or brewing company are the only drinks available to customers. Some bars now have “guest beers” but these are often “tied taps” – taps financially tied to breweries, so beware of “faux free houses” !

Nelson’s Free House is a true free house that grew out of the activities of two Nelson-based beer drinkers, Mic Dover and Eelco Boswijk. In the early 2000s, Mic and Eelco became increasingly frustrated at living in the heart of New Zealand’s craft brewing region, yet finding themselves living in a city with virtually none of these tasty beers on tap on local outlets.

The immediate solution to this dilemma was the creation of Mic and Eelco’s company Dead Good Beer Events in order to host regular beertasting events at Nelson’s Founders Park. These quarterly “Beer Fetes”, featuring local and national craft beers, were extremely successful and led quickly to the idea of MarchFest – an annual craft beer and music festival which asks local craft brewers to create a brand new beer each year, especially for the event.

In 2009, a tiny wooden church came on to the property market in Collingwood St, Nelson. Mic and Eelco glanced at it, both having the same thought – “what a great building for a pub.” The thought would not go away, and having had no desire whatsoever in their lives to own or run a pub, Mic and Eelco felt the call of the universe to “set the beers free” and give Nelson beer drinkers their first true free house.

The Free House boasts ten beer taps plus three real ale hand pumps serving an ever-changing menu of craft beers. Since 2009, the pub has served over 850 different beers from over 60 independent Kiwi breweries.

Apart from choice, another key characteristic of the beer events had been the importance of ambience and a civilised environment where convivial conversation in a safe and secure environment takes precedence. The Free House has built on those core beliefs - throwing TV screens, pokie machines and mediocre food offerings of the traditional Kiwi pub into the wheelie bin of history.

The Free House has a tiny kitchen, which made offering in-house cuisine very difficult. The initial solution to this problem was to allow customers to order food in from nearby outlets such as The Indian Café opposite the pub. More recently they have added another food option - the ‘Mint’ menu – tasty food dishes prepared by the adjacent award-winning Mint Dining Rooms.

In 2010, The Free House expanded into a neighbouring property and transformed it into a beer garden with lawns and edible plantings.

In 2011, the Mongolian Yurt was erected, allowing gigs, movie nights, pub quizzes, wedding receptions and many other kinds of events to be held at the pub without disturbing the drinking peace and pleasure of regular pub goers.

The Free House has free wi-fi, the occasional darts night on Thursdays and many other quirky attractions! 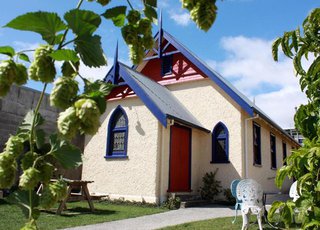