Sundial Square is located in the Town Centre at Croucher Street, Richmond. It is designed to be the town square at the heart of Richmond and is a favourite spot for a self-catered outdoor lunch. There is often lunchtime music during the Christmas period and is the site for the popular Last of the Summer Fare celebration.

The sundial in Richmond’s Sundial Square has been a feature of the town since it was unveiled by then Mayor Kerry Marshall on 26 November 1994.

It was designed by engineer and amateur astronomer Peter Knowles, who started looking for something interesting to put in his garden and ended up with a one of a kind community-funded sculpture. The sundial is constructed from mild and stainless steel, it weighs approximately 800 kilograms, stands 2.2 metres high,and 1.7 metres wide. This is a precision sundial that can be accurately read within 10 seconds of the actual time.

Peter got the idea of the sundial after watching a documentary by the late Carl Sagan (a distinguished American astronomer) about the Anasazi Indians, who lived in the South Western United States around three thousand years ago. The Anasazi built stone temples that were aligned to the sun and tracked the seasons through the year.

The sundial took four years to design and build, and was manufactured by Trinder Engineering. The cost of $27,000 was covered by a community fundraising effort and contributions from the Tasman District Council.

Peter has designed the sundial to specifically work in Richmond, if it was moved more than 100 metres it would no longer work correctly. The sundial is equatorial, which means it is aligned to the earth’s polar access. 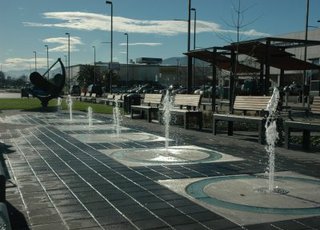